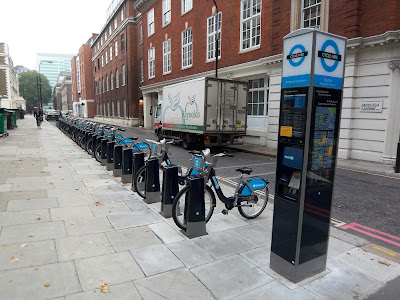 Spotted a row of Boris Johnson’s Electric bikes. A long queue of them here on Endsleigh Gardens in London. Couldn’t resist a look at them and check out the prices. I’ve never ridden one of these and fancied a spin.
No chance. First you need to become a member, that lets you buy a key, you cannot just pick one up on the day and then there are various costs. I wont go into it all, but basically to hire a bike for nine hours (work and back) it would cost you £54. Late charges for returning outside their time slot, that’ll be another £150, and another £300 if you damage it. See here.

Across the whole of Britain (that I’ve seen) , the attempts to get people out of their cars and onto bikes, are laughably inadequate. We all know about the cycle lanes that simply ‘END’, where you would actually need a cycle lane, like at a roundabout, or the lanes that disappear when the road gets too thin to paint in a cycle lane. Also annoying are the cycle lanes that run for five metres, and of course the helpful ‘Cyclist Dismount’ where the engineers have failed to put in adequate infrastructure to accommodate a bike - or more usually, for no good reason at all.

Although I appreciate that they are making some attempt at making things bike friendly, why don’t they see that most of what they do is whole useless, they must know, they’re not stupid people. Just send them on a jolly to Denmark, Holland, Germany etc. to look what they do. All of these countries have very similar solutions and work well. Where needed, bikes get a lane stepped up from the road, similar to the area that pedestrians get. Bikes also get priority on roundabouts, so you can actually go round them without being killed.

Anyone for a weeks commuting to work on one of Boris’s Bikes. That’ll be £270, thank you very much - and don’t scratch it! 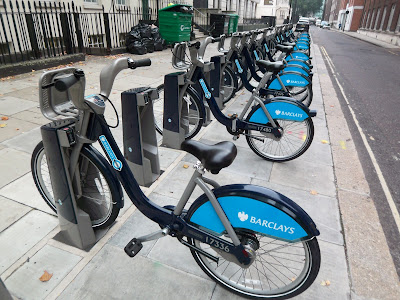